The school of Theophanos the Greek

The middle of the XIV-th century in the Byzantine Empire was marked by spreading of the mystical doctrine and ascetical practice known as Hesychasm. The word “Hesychasm" came of the Greek word "Hesychia" - rest, silence. Hesychasm was formed in the early Byzantine epoch in the Egyptian and Sinaian cloisters. However in the XIV-th century this doctrine for the first time came out the monasteries, got the theoretical foundation in the works of the Saint Gregory Palamas and became accessible for laymen.

The middle of the XIV-th century in the Byzantine Empire was marked by spreading of the mystical doctrine and ascetical practice known as Hesychasm. The word “Hesychasm" came of the Greek word "Hesychia" - rest, silence. Hesychasm was formed in the early Byzantine epoch in the Egyptian and Sinaian cloisters. However in the XIV-th century this doctrine for the first time came out the monasteries, got the theoretical foundation in the works of the Saint Gregory Palamas and became accessible for laymen.

Our accounting assignment writing services are here to offer the best solution for students. We are a company that is going to help you with your homework, including accounting, management, business, auditing, economics, and other academic assignments from college or university. Just send your task on any subject to the accounting assignment helper, and we will provide you with everything you need for the best grade to become a top student.

The Hesychasts taught that the unutterable Logos, the Word of God, can be perceived in silence only. Contemplative prayer, refusal of the verbosity, comprehension of Logos in His depth - here is the way of God cognition that the teachers of Hesychasm professed.

The great meaning for the Hesychasts’ practice had the contemplation of the Fabor light - the light that Apostles saw during the Transfiguration on the Mount Fabor. Hesychasts taught that through this Light, uncreated by essence, ascetic comes into the intercourse with Inconceivable God. Filled with this Light he imparts to Divine life and becomes the God “on grace”. That is the way of theosis – the deification of human.

The doctrine of Hesychasm propagates the way of connection of the man with God through the "purification of the heart" and through the concentration of the spiritual and devotional power on the so-called "wise prayer" conjugated with the mental and physical human functions.  The heart plays the great role in the "wise work” of Hesychasm.

It is worth saying that in many traditions the human heart is closely connected with the symbol of the Cup. Thus, in the Egyptian hieroglyphic script the heart always was depicted as a cup, and according the opinion of French mystic Rene Guenon the Cup of Grail is the heart of Christ.

It wat just Hesychasm that inspired the creative work of the most famous Byzantine painter Theophanos the Greek (near 1340-after 1405).  According the data of the written sources he spent some time in Crimea on his way from Byzantium to Grand Duchy of Muscovy. There he have painted a few churches. Our days the traces of Theophanos or the painters of his school can be founded in the medievial churches of Tavrika.

The picture for Hesyhasts was not the source image for the further upbuilding, but the ultimate aim of the speculation and the realization of the expected - Light of the future age. Rather grotesque frescos of Theophanos the Greek that were born in the ecstatic prayer impress with the combination of realism and phantasmagoria.

"The ecstasy on the frescos of Theophanos, like on the frescos in Volotov, is not only the subject but the way of representation. It is the painting of "storm and onslaught" with its sharp subjectivism, large generalization, pathetic dynamism, with its flaming geometry it looks like the Gothic expressionism…The heightened psychologism of Theophanos tells not about the mentally-human but as if devotional titanic. His created images look like the heroes of the world tragedy", - wrote the researchers Millet and Diehl

The frescos of Theophanos in the Church of Transfiguration in Novgorod visually illustrate the possibility of the human flash transfiguration under the influence of "wise work". In these frescos he painted a number of ascetics, which are close to finish the deification. Beneath our eyes the activity of the white color increases from image to image. 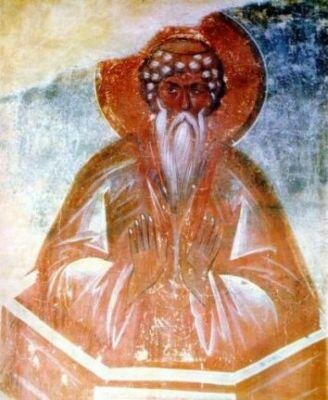 Colossal craftsmanship and realism are the evidence of the fact that Theophanos himself could be the witness of visions like the following:

“After doing this he saw a man wearing the raiment, hundredfold more bright and sparkling that lighting; his feet and hands and face sparkled as much radiantly. Around that man there were five Archangels arrayed in the same raiment and looked the same way. Each of them had six wings seemingly from the burning flame, and each of them hold the blooded sword in the left hand. The redoubtable man had the sign inscribed on his brow: "So I will come to judge everybody and everything in the horrible and menacing day". (The Quest of the Holy Grail) 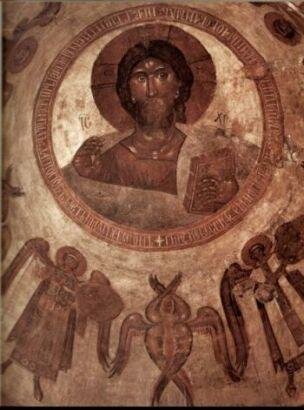 The theme of “The Adoration to Sacrifice” interpreted in the spirit of “Diataxis” by Hesychast Patriarch Philotheos Kokkinos, is also an important part in the Theophanos creative work. 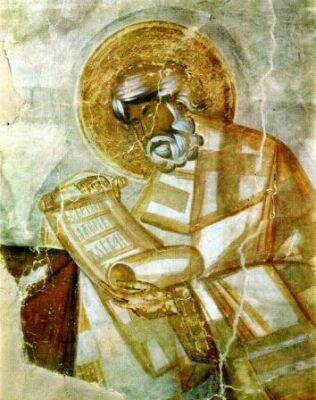 Some frescos in Eastern Crimea, saved almost by a miracle, are inspired with the severe and flaming religiousness. The researchers have the opinion that these frescos could be painted by Theophanos or connected with his school.

Particularly it could be the wall paintings in the St. Stephan Church in Feodosia-Kafa. The image of Holy Mother in this church reminds the posterior work of Theophanos dated by the 1405-th year AD. 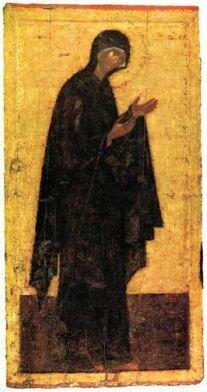 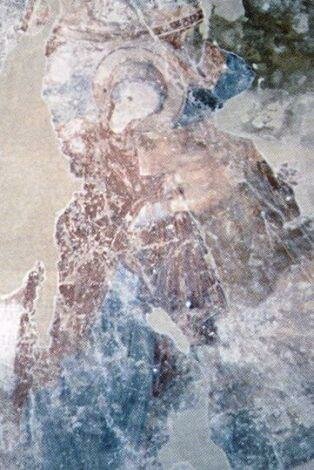 The basis of the wall-painting is the Holy Communion of Apostles by Christ from the Cup at the Last Supper.

"Due to the laconism of coloration, to the full of energy modelling of faces and bodies with the help of light plans, to the daring lines and powerful shapes of human silhouettes, to the abundance and the plastic variety of draperies you can feel in this ordinary provincial monument the anxious breathe of the epoch that gave life to the creative work of Theophanos the Greek ". (O. Dombrovskiy “Frescos of Middle Age Crimea”). 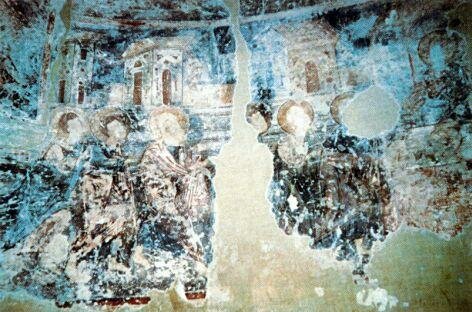 Another small fresco remained in the church of St. John the Forerunner in Kerch. The unknown Saint is painted on it.

"The oblongness of the proportions, refined simple interpretation of pleats, and the ascetic poorness of colors and almost grotesque boldness of the image insistently resonates with the images of frescos of Theophanos the Greek" (O. Dombrovskiy “Frescos of Middle Age Crimea”). 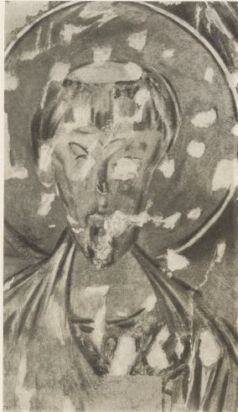 The school of Theophanos the Greek