The flourishing of the Theodoro state falls on the first half of the XVth century as far as the time of prince Aleksios I governing.  Also to this time are referred beautiful frescoes in the Southern monastery of Mangup.  Painters felt the breathe of the Renaissance and interpenetration of Byzantine classicism and Italian influences is obvious. In the centre of composition Christ with his right hand raised for the blessing, his left hand holds the Gospel. Calm face with classical features approximates to the majestic type of Christ on the mosaics in Constantinople church Kahrie-Jami. He is surrounded by the angels and saints looking as grandees surrounding Byzantine Emperor. On the frescoes one can see Saint Equal-to-the-Apostles Constantine and Helena. Special solemnity of composition supported with cold colors and elegant lines. 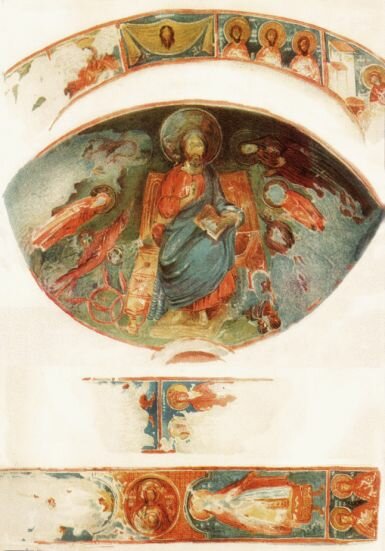 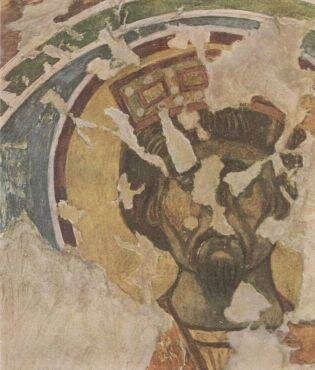 The tendencies found in the Church of Donators reach their peak here. Christ is represented here not as the “good shepherd” but as the “severe unapproachable lord, who is sitting in state luxuriantly closed on the royal throne among the attributes of Greater power, surrounded with heavenly Powers separating Him from the church visible.  On the frescos in Southern monastery of Mangup painted at the time of prince Aleksios I even the figures of Mother Mary and one of Apostles get aristocratic nature: gracefully draping themselves with rich garments they make a ceremonial bow before Pantocrator”.

However it is discommendable to see in all this the imperial paphos exceptionally. Frescoes of Mangup monastery created a few decades before the downfall of Byzantine world carried the impression of anxiety.  Severe Savior reminds the Day of Judgment, and Mother of God’s face is not as calm and serene as on the classical Byzantne images but expresses sorrow and grief. 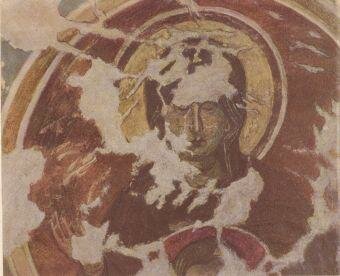 After the Turkish invasion of Mangup in 1475 the spiritual life did not fad away immediately. The building of new churches went on and new frescos were painted, but after the Theodoro principality the art became lifeles .  From now its main task was to save Orthodox faith, and the art became intentionally conservative and opposing any changes.