The existence of Theodoro principality concurred with one of the most bright periods in the world cultural history known as the Palaeologus Renaissance. According the opinion of the art historian G. Kolpakova “the base of this brilliant flowering was the intensive revival of the spiritual life. The closing stage of Byzantine culture was characterized by active creativity, search energy, heightened interest to art as the most important matter of life. It was as though Byzantine culture summarized its development on the edge of unavoidable end”

The early period of the Palaeologus Renaissance (end of the XIII-th century) is notable by the growth of Balkan Slavish influence on Byzantine art. Mostly in the painting of Serbia and Bulgaria old canons were wrecked that time, vitality of the images grew up and became more dynamic and brightly expressed.

The most outstanding examples of this period in Tavrika are the wall-paintings of the Eski-Kermen “Church of Assumption” and “Temple of Three horsemen” that are stylistically and ichnographically close to leading Serbian and Bulgarian painting of that time.

The composition base of the wall-painting in the “Three horsemen” cave church is the image of three Holy Warriors: St Theodore, St George and St Dimytriy. Their images are inspired with dynamics and are distinguished with uneasy rhythm of lines and sharp combination of green, yellow, deep red colors of the faces.

More compound wall-paintings with a number of scenes and compositions can be found in the “Church of Assumption”. Whole frescoes have been lost and only fragments remain in our days. However these fragments let us suppose not only Balkan influence but the prolongation of cultural interaction with Syria, Asia Minor and Armenia. 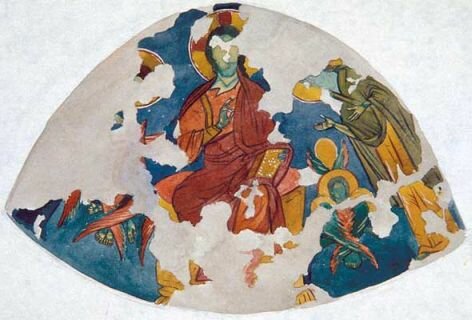 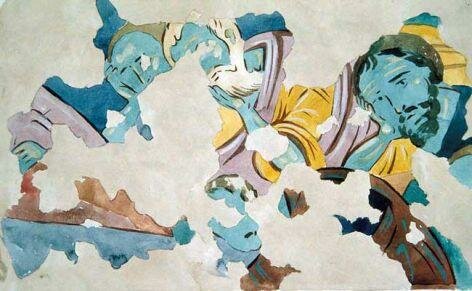