The princes of Theodoro were from Gavras or Gabras family. The origination of this dynasty was form Syria or Asia Minor. The first representatives of this family are known from the X-th century, and at that times the family was already considered as noble, and its members were representatives of Byzantine aristocracy.  Syria and Eastern part of Anatolia were the border regions of the Empire and the areas of endless battles with the Muslims. It was the place where in the atmosphere of passionary drive the formation of new aristocratic elite that played the leading role in the Byzantine Empire during the three centuries (from the X-th till the XIII-th century), began.

The most famous representative of the dynasty, who became its Saint Protector later, was Theodore Gavras. He was born about the 1050th AD in the city of Atra, in the province Coloneia in Asia Minor. When Byzantium troops were smitten hip and thigh by the Seljuk army in the battle of Mantsikert in the 1071-st, the Empire troops went away from the Eastern regions of Anatoliya. The local feudal lords had to defend themselves from the Turks. Young military leader Theodore Gavras gathered in his tenure the detached force and freed Trabzon from Muslims without help from Constantinople, afterwards he moped up from Muslims themes (provinces) Chaldia and Coloneia. The Emperor had nothing to do but to recognize him as the ruler of these regions. In the 1098th he started the military operation against the son of sultan Ismail of Horasan. In the battle of Bayburt in Armenia Theodore Gavras was taken as a prisoner and few month later in Erzerum he met the death as a Martyr because he refused to be convered into Mohammedan religion.

The Gavrades ruled in Trabzon till the middle of the XII-th century, but later they were superseded from their capital by the representatives of the Comnenus Emperor dynasty.  Some members of family settled in Constantinople.

Another branch of the family played the important role in the Trabzon Empire.  The third branch settled in Tavrika. At last, the members of the fourth branch, which started from the military leader Michail Gavras and princess Eudokia Comnenus, created the independent possession in Bulgaria, known as Koprivshtica despotate , that existed as autonomous Byzantine principality in the Ottoman Empire till the end of the XVII-Ith century.

The representatives of Crimean branch of the Gavrades family were connected with the Emperor Dynasties of Comnenus and Palaiologus, noble families of the Asans (Bulgarian kings), the Dushans (Moldavia princes), the Tzimblaks and the Circassian princes. The Grand Prince Ivan III of Muscovy proposed Helena, the daughter of Theodoro prince Isaac, to his elder son Ivan as a wife. The sister of Alexander, the last despot of Theodoro, Maria, known as «despina of Moldovalachia» , was the wife of Moldovian prince Stephan the Great. 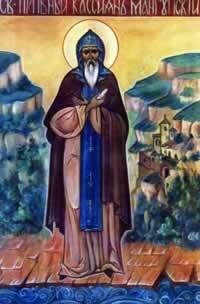 Some members of the Gavrades family emigrated to Muscovy became the progenitors of Russian noble families: the Golovins, the Hovrins, the Tretyakovs, the Gavrilovs and the Harlamovs. One of the Gavrades was canonized by Russian Orthodox Church as the Saint Cassian of Uglich.

The sources about Theodore Gavras

"In the imperial town stayed Theodore Gavras.  Knowing the impudence and energy on this man, Aleksios decided to move him off the capital and that’s why he set him as the Duke of Trabzon, which he got away from Turks earlier. Gavra was born in the mountain regions of Chaldia and he won the glory of valiant warrior, because he excelled everybody in courage and mind. At any of his deed, even the little one, he did not met with failure and always got the better of his enemies; and after seizing Trabzon and making it his possession, he became unconquerable at all. ".

From the Life of Saint Theodore in the Great Synaxarion

“Instead of appeasing the tyrant and illuminating his heart with these salvific words of Martyr Theodore, Amyrali became even more hardhearted to the point of submitting St. Theodore to the most severe tortures. First Amyrali had the saint spread face down in the snow and vigorously whipped his back, thinking that this would weaken the saint and make him renounce Our Holy and Pure Faith. Amyrali was whipping Blessed Theodore in vain. St. Theodore not only remained steadfast, "Like Mount Zion" (Psalm 125: 1) on the pious rock of Our Faith, but continued to exclaim the following to the heights of Heaven, "Thank you, Most High King, Son and Word of God, that you have found me, unworthy that I am, to be brought before the stadium of struggle. Empower me, Lord, to become a worthy sacrifice before You, Master, as your grace of salvation to mankind, with Your outstretched Hands on the Cross. Deign; Holy King, to see me become a participant in your Heavenly Kingdom."