Foundation of the Theodoro principality

On April 12 –th 1204 the Fourth Crusade army invaded and conquered Constantinople. Crusades which in concept of its organizers had to serve to the deliverance of the Holy Land and the Holy Sepulcher from the Muslims turned in fact against the capital of Orthodox Byzantine Empire.

The history of the hundred-year Orthodox Kingdom came to the end. However Crusaders were incapable to occupy all the territory of Byzantium.  Everywhere they met with fierce resistance. The majority of Asia Minor provinces, western regions of Balkans and Tavrika disclaimed the power of new Latin Emperor of Constantinople.

Byzantine possessions in Northern part of the Black Sea region became the vassalage of Trabizond Empire – the state with the capital in modern Trabzon, which was found by the grandchildren of the formidable emperor Andronic I Comnenus Alexius and David with the help of Queen Tamara of Georgia. They were administratively united to the Perateia (beyond the sea) province.

Theodore II Gavras, the noble eastern aristocrat relative of the imperial Comnenus dynasty, was nominated as a ruler of this province.

Trebizond Empire soon got drawn into unsuccessful wars with Seljuks and Nikea kingdom and as the natural result it lost the control under remote overseas provinces. Consequently Byzantine governor in Tavrika turned to be independent ruler and got the title “The Prince of Gothia” 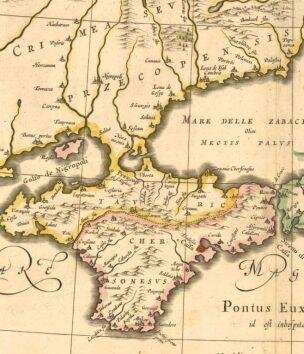 Foundation of the Theodoro principality